The building environmental conditions were poor, and was affecting staff wellness. This was attributed to an aged and faulty BMS and issues with the major plant.

Much of the work was to the live office floor areas of the building which had to be carefully planned to take place over weekends, and during this phase, seven day working had to be introduced for a period of 21 weeks. Each floor worked on had to be cleaned and ready for M&S operations to resume every Monday morning by 6am - a challenge met by our onsite team which averaged around 25 operatives each weekend. These included electricians, pipefitters, commissioning engineers, ceiling fixers, floor fixers, porters and cleaners. 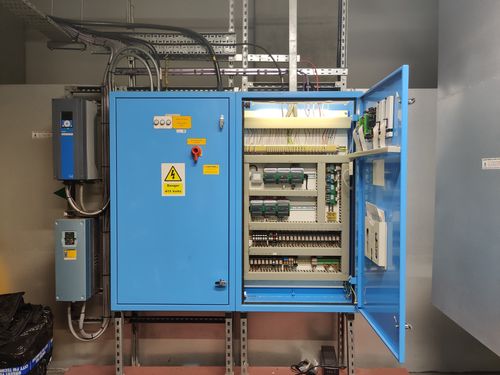 The base contract included the upgrade of 19 existing control panels and the installation of 42 outstation panels, associated controls cabling, and the exchange of circa 900 cooling and heating valves, a new comms network, new CHW supply pipework and numerous plant integration works. During the project, we highlighted several legacy plant issues throughout the building, and these were added to the adi scope by M&S as variations and rectified within the works programme period.

Additional works included upgrades to the chillers, air handling units and smoke damper systems to name just a few. The project was led by adi Intelligent Building but was an adi Group collaboration project which included adi Climate Systems and adi Environmental.

Because of the BMS and HVAC plant upgrade, this resulted in better environmental conditions for staff.

British value-for-money retailer focused on own label businesses, including Food, Clothing & Home and Bank & Services in the UK and internationally. Today, we operate a family of businesses, selling high-quality, great-value own-brand products in the UK and internationally, from 1,509 stores and over 100 websites globally. Together our 70,000 colleagues across our stores, support centres, warehouses and supply chain serve nearly 30 million customers each year.

More than just a BMS upgrade

HVAC upgrade which was managed by Intelligent Buildings, and the project included multiple divisions, such as adi Mechanical & adi Electrical

Principle designer and contractor under CDM

Working in a live environment